this fall, i was privileged with the opportunity to participate in two arts festivals in newcastle, australia. these festivals were "electrofringe," whose focus was on the practice of electronic arts, and "critical animals," whose focus was the critical theory underlying creative endeavors. both of these festivals are components to a larger meta-festival called "this is not art." i was invited to engage in a variety of artistic and pedagogical events, some of which were newly realized just for the festivals (viz. songbirds). 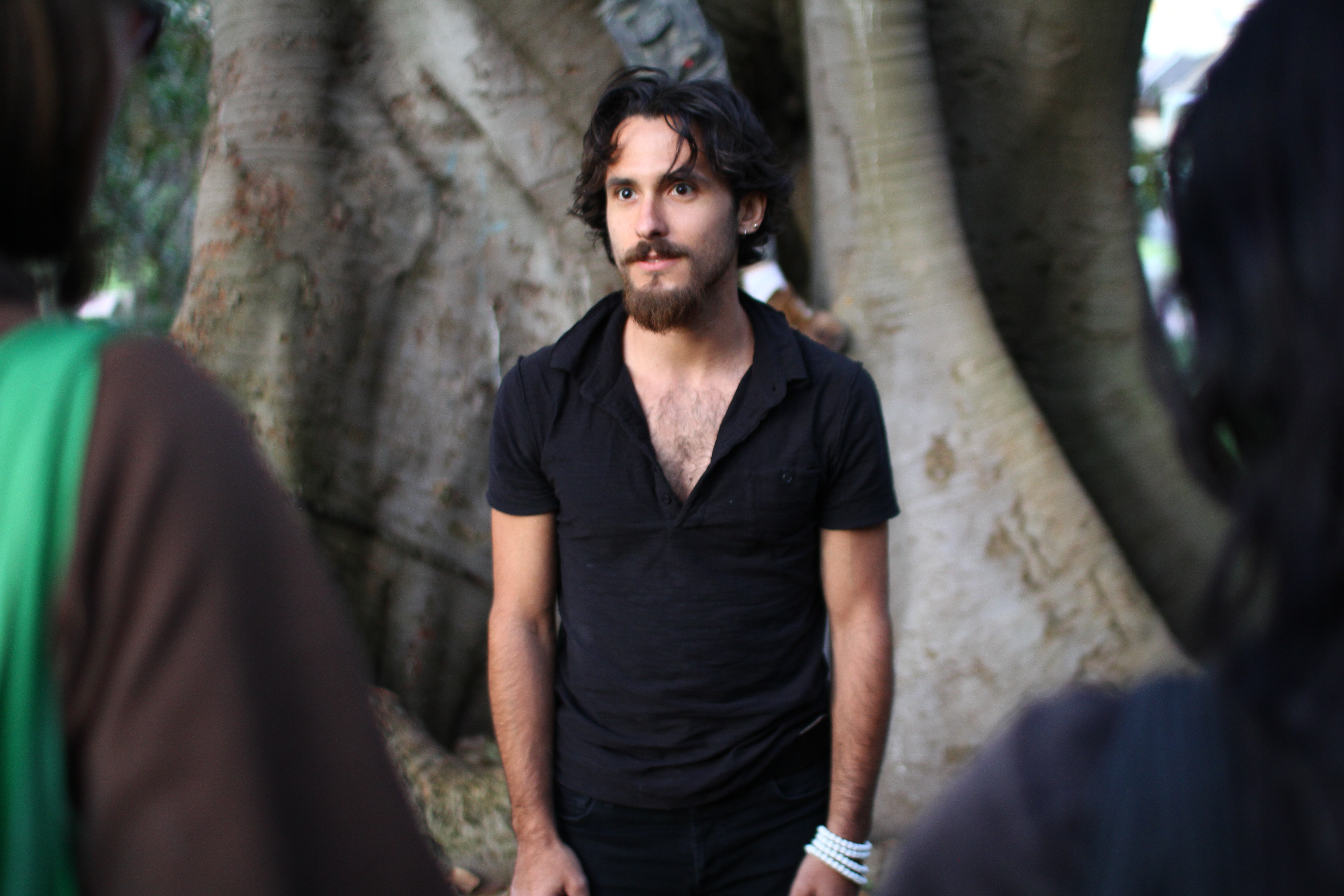 there i am. deliriously. behind me stands the gargantuan pepper-fig tree wherein i installed the songbirds. before me stand two of many figures, each scratching their heads, perusing the various handmade merch and observing speechlessly as an overly sanguine housecat picks a fight with one, and then a pair of magpies. 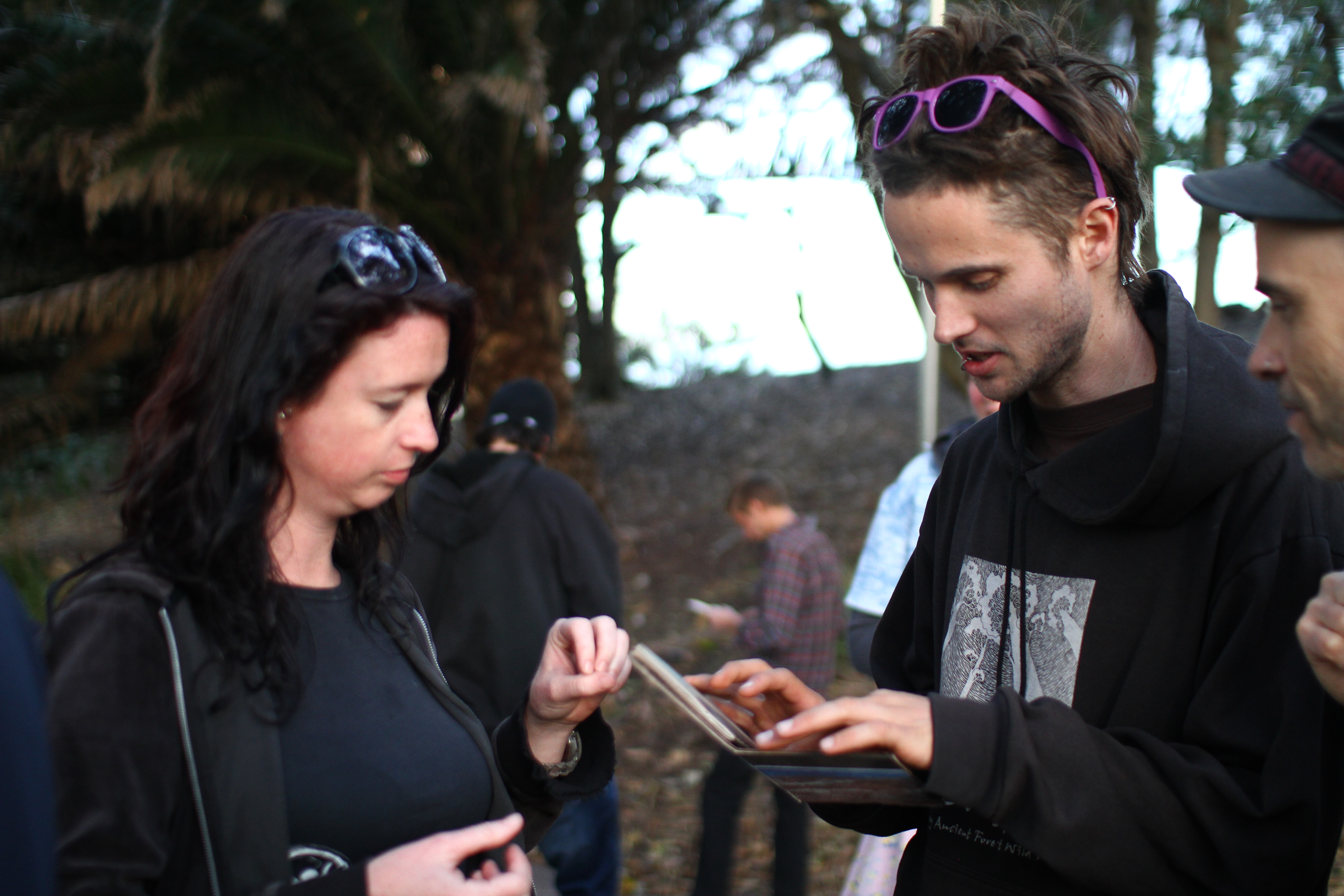 that's the split etape ep by creosota, my duo project with adam tinkle, side a, with the high sotiety solo live album, side b. 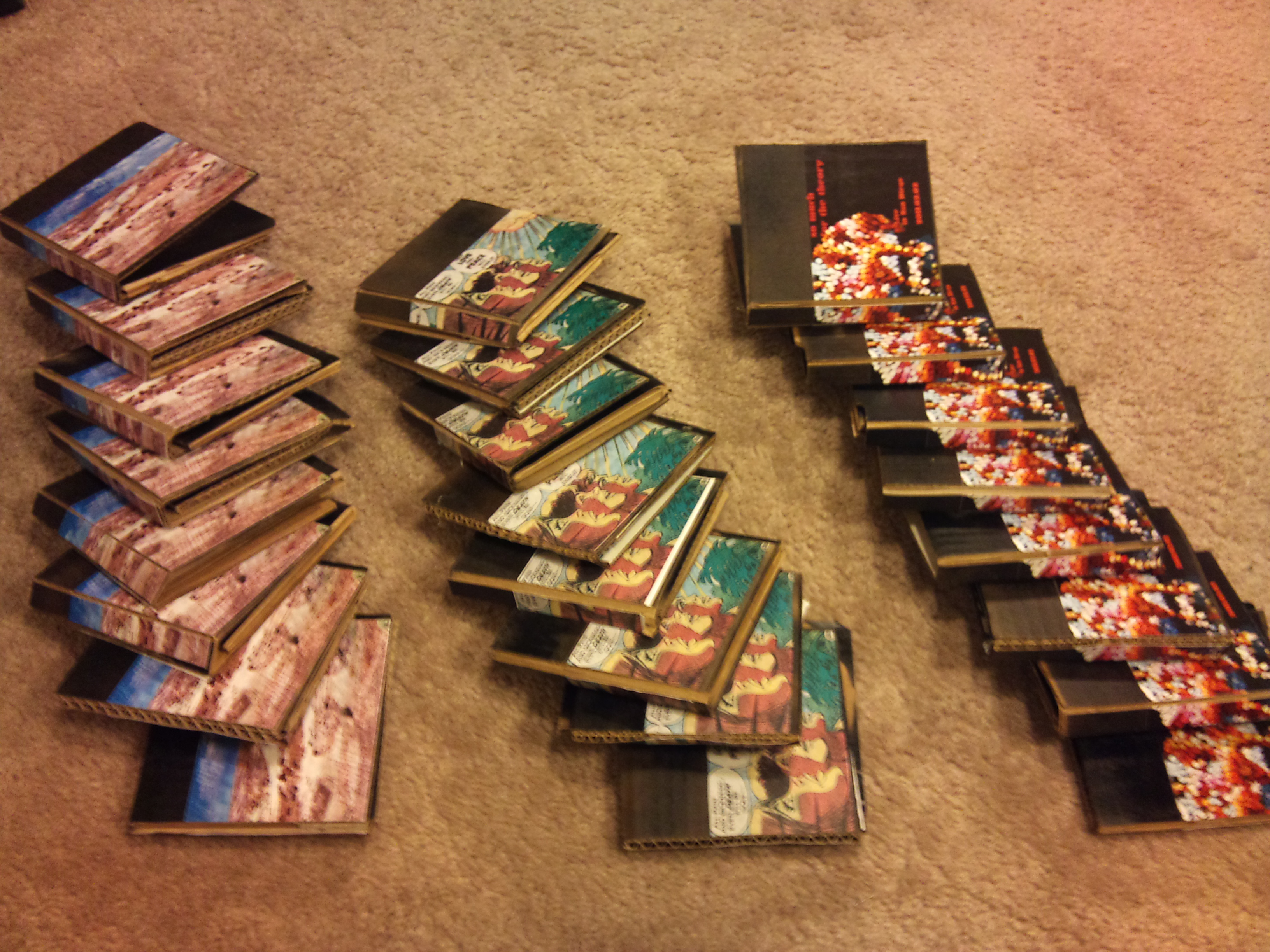 incidentally, here's the entire sonic samizdat. that's the above mentioned etape / high sotiety split, the MUTANT SEAL HOMICIDE (by a. goodwin & me) / set them free (me solo) split, and the live solo album so much for the theory. 8 pcs of each. 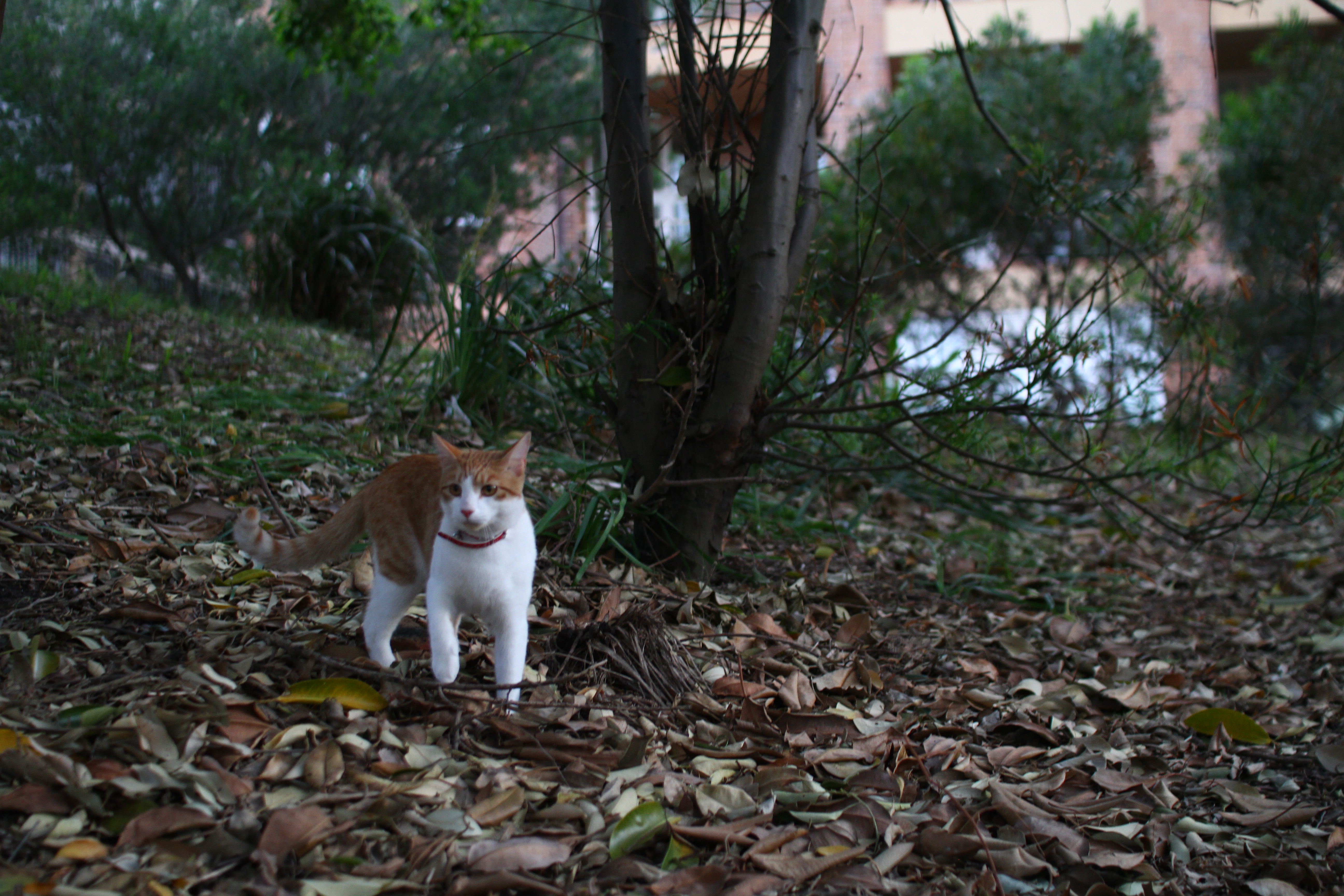 we all had to admire this cat's vim in the face of clear and present danger from above. 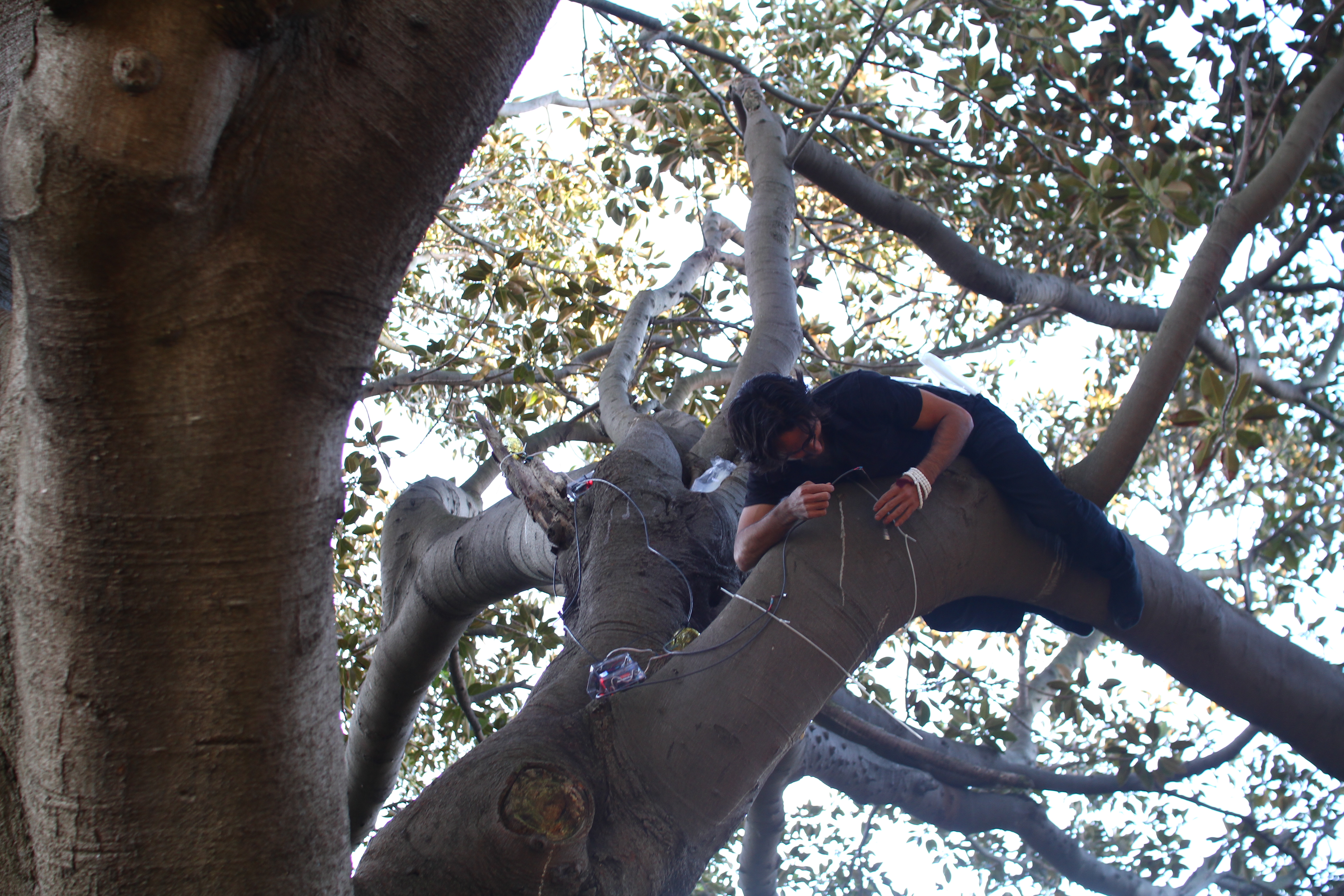 meanwhile, due to what now seems like a terribly unfortunate collection of miscalculations, i am doing my best scansorial primate impression among the gargantuan pepper-fig tree's branches. more on these miscalculations in a moment. 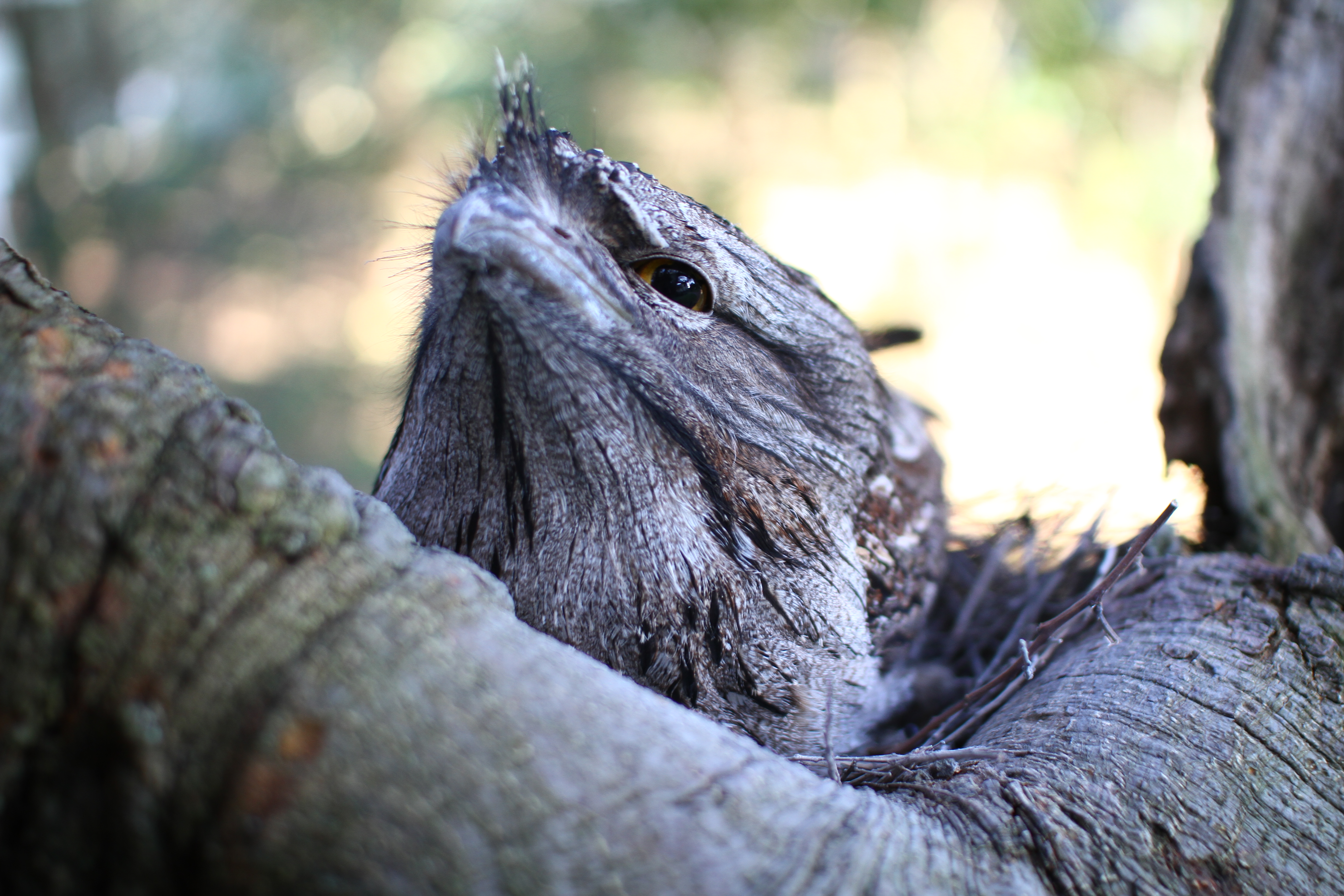 i met a lot of memorable characters that day, including this tawny frogmouth, whom i mistook for part of the gargantuan pepper-fig tree, until he opened his giant yellow eyes to stare at me, disapprovingly.

at this, my first event, i installed ten prefabricated songbirds in the gargantuan pepper-fig tree. i chose to use these little yellow glass votive candle holders instead of trying to collect bottles. 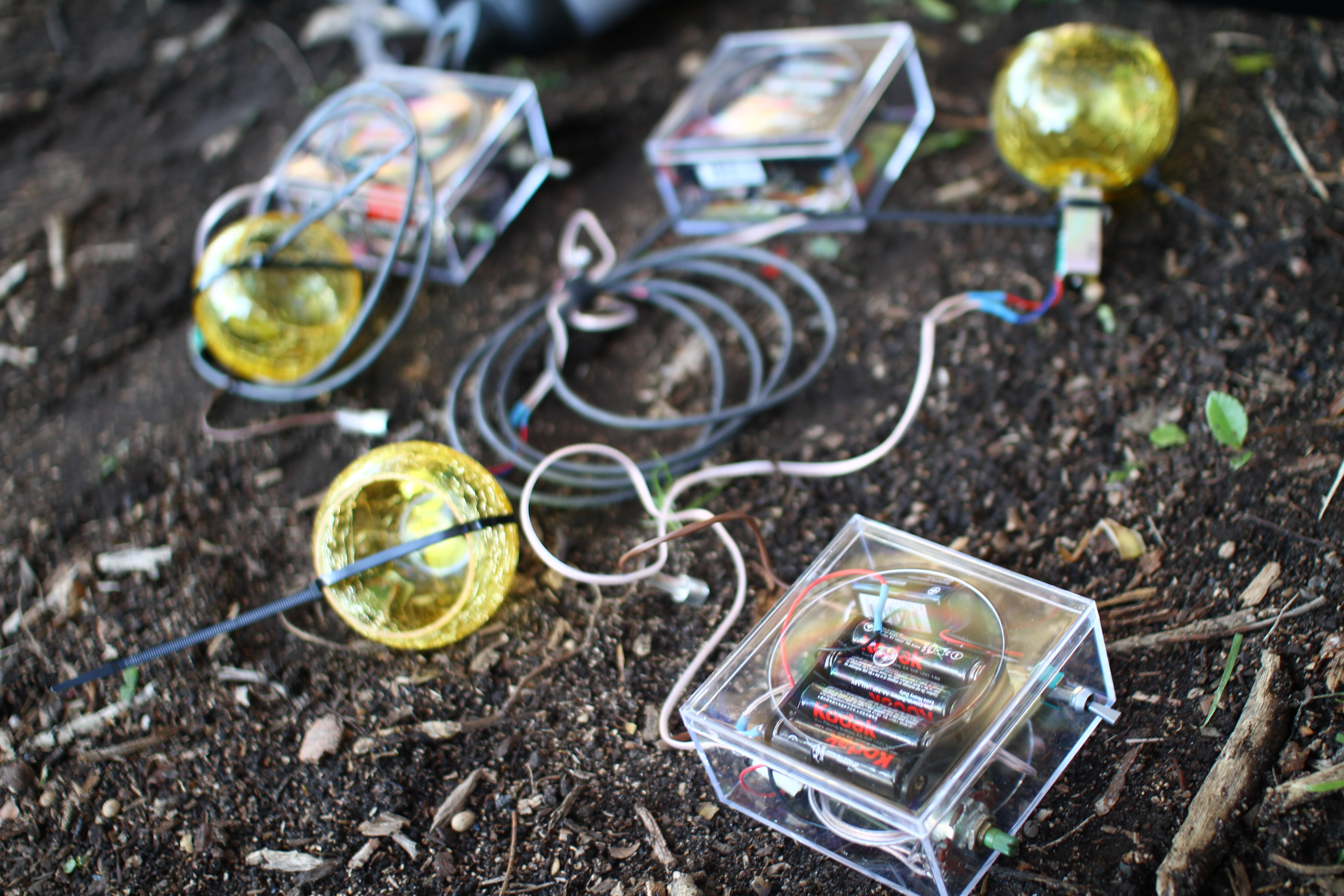 this was probably a bad idea. the candle holders weren't nearly loud enough to produce feedback among the other nodes. they did, however, look beautiful. and functioned, indoors.

if i could do it all over again, i'd have preempted the crowd and installed these songbirds long before the moment of. it was also probably unwise to have billed the event as a performance, although it certainly had been, albeit one that veered from expectation significantly. that gargantuan pepper-fig tree was a riot to climb though, and people really seemed to dig the various handmade merch and the bizarre ozzy fauna. 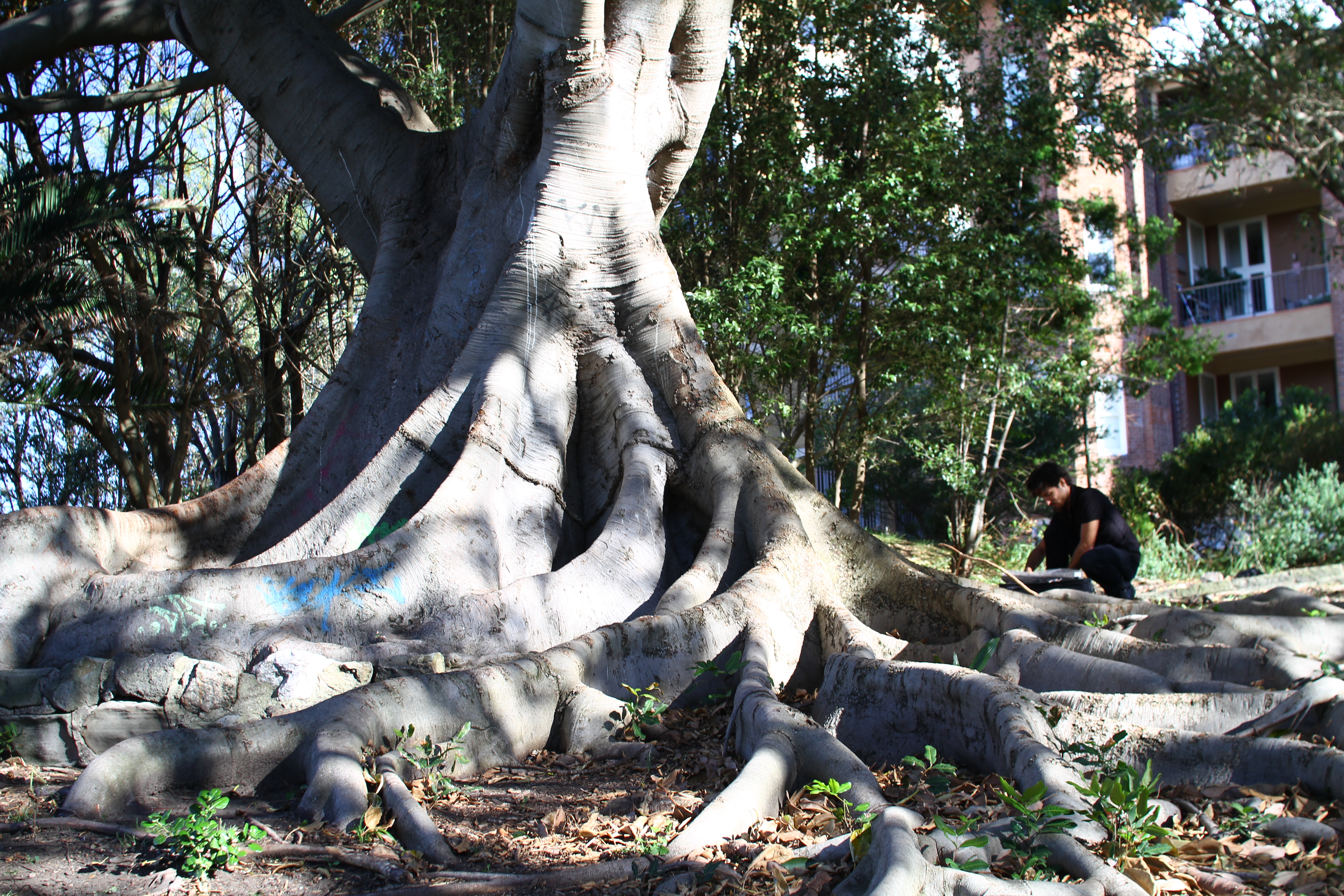 later that evening, i participated briefly in a colloquium on experimentalism in art, hosted by critical animals. my contribution was brief because i had been nearly double-booked for an electrofringe event. although my remembered comments were mostly inarticulate, splintered and confusing, my hosts were accommodating and endlessly polite with me. i suspect this is because i was the only american on the panel, and they didn't want me to bomb them or something. 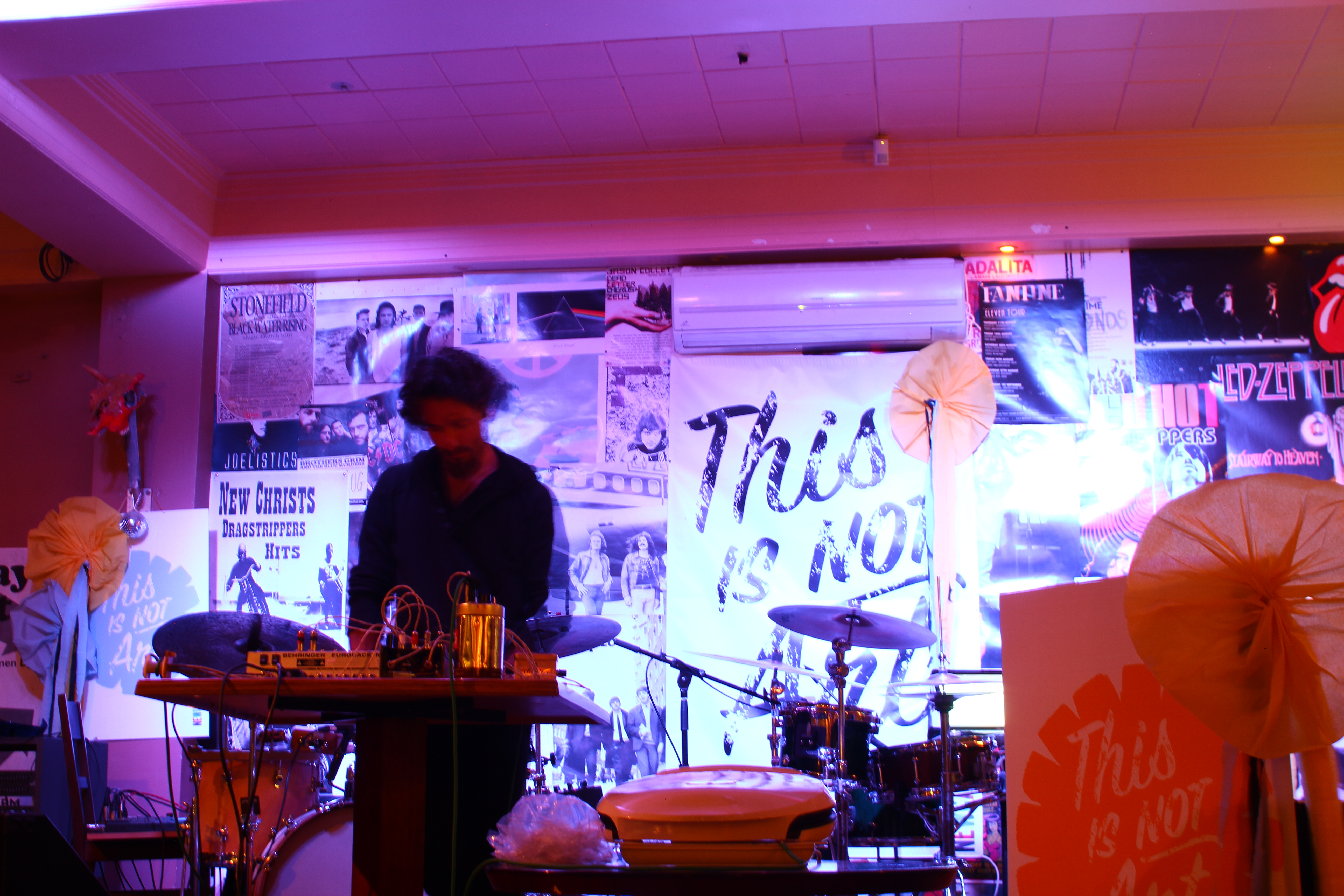 and then, i did bomb them. aurally. using a custom-built analog synth, a george foreman grill and a quarter pound of minced kangaroo meat. in certain circles, this composition has become somewhat infamous. to this day, i believe it could be the piece of mine with the most legs. in this case, it had two very strong ones.

typically, meat drone is performed with ground chuck, but when i was invited to attempt it with minced 'roo, i was unable to resist. this version was particularly relentless, because there was barely any accompaniment to the monotonous carnal drone. when finally there was abrupt surcease from the bombardment, i checked the grill and the meat had disappeared. aussies... 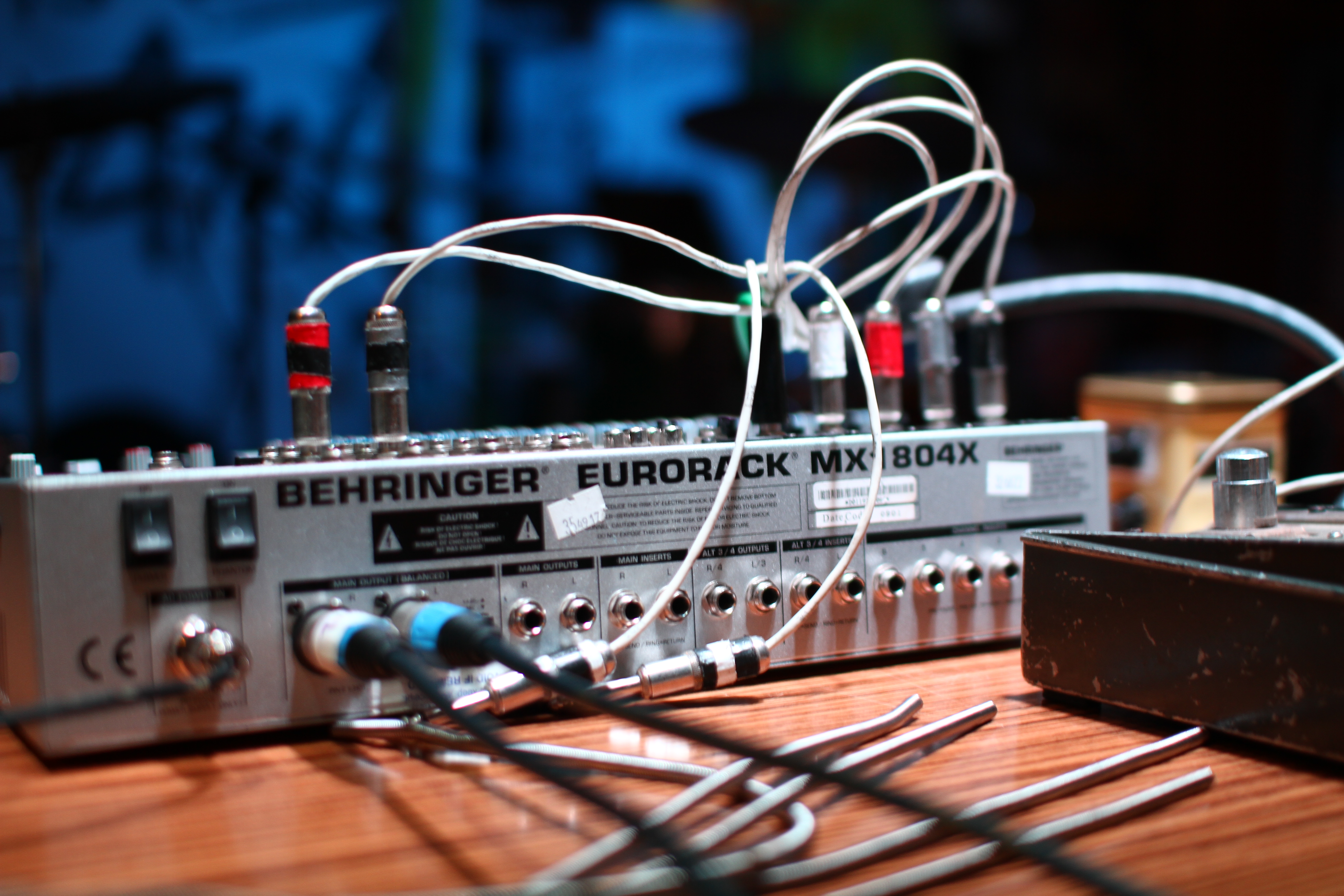 still later that evening, i performed a dj set of some of my more accessible music to a crowd of people expecting chiptunes. they were confused, some pleasantly. these two performances comprised part of the so-called electrobinge showcase, which turned out to be intensely fun.

the following morning i lead a workshop on how to build the songbirds from kits. as it turned out, this was a lot of participants' first time soldering or working with electronics at all. as a result, four hours were not nearly enough time to achieve our stated goals, and an ad hoc workshop occurred the next day, for the verily hardcore / interested / friendly.

finally, i gave a short presentation about my practice, particularly with respect to give me everything, a composition "about" the m-train in brooklyn. it was scattered, and in mono, but these are all things wo men bu neng qiang qiu, no?

newcastle was awesome. i had the most incredible time hanging out with friends new and old (ykwya), inhaling greasy vegemite-soaked breakfast sandwiches, and feeling like an utterly spoiled brat. my understanding of australian culture acquired such subtle dimensions as that "jelly wrestling" actually means "jello wrestling" in australian english. i also believe i experienced first hand what a "bogan" is, although the term is so enveloped in shades of cultural differentiation that it's truly impossible to know definitively. furthermore, from previous experiences on the continent, i had already learned that what we in the states would call "whiskey" is actually australian for "scotch," and that if one expects american-style "whiskey," one must actually ask for "bourbon," which here in the states is a different kettle of fish altogether. this planet truly is a strange and varied place.