I'm still working on SoV.Â  Now that the flocking is fixed, I've moved on to debugging the parameter space itself.Â  I had been saying this whole time, since winter, that the x,y coords relate to the frequency and phase of the notes being struck, but I found out today that this is not quite the case.

If it were the case, and you mapped the phase information (whether the note should be struck or not) for every point, it might look like this:

In the picture above, colour is used to denote where in the phase the oscillation should be, given that position.Â  It's a wave terrain, basically.Â  Now for the fun part.Â  When I first started trying to notate (!) the system into a function system, I ended up with some chaotic-seeming behaviors.Â  Graphing the system revealed the bizarre truth, yielding something that looked like this: 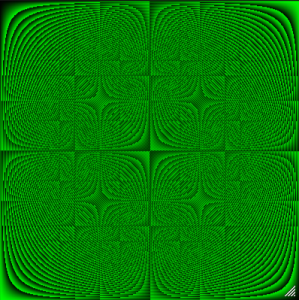 This is not what I was expecting!Â  Above we see the same terrain as before but zoomed way out.Â  The patterns are the result of aliasing.Â  Even using a very high resolution, these patterns appear (in fact they get worse).Â  They are the result of sampling itself, and actually require a smoothing filter to reduce the artifacts, much like sound aliasing.Â Â Â  And, also like its sonic counterpart, I think it's gorgeous.

This one is even higher resolution.Â  The self-similarity is so pleasing to me.Â  And finally, my favorite: 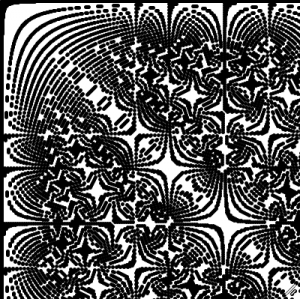 I have actually made a few animations of these, where I alter the z-axis and you can see the whole system seem to bubble and seethe when you are really just zooming in or out.Â  This last one looks like it was knit or something.Â  I think it would rule as a sweater or blanket.

Don't worry, I'm still working on SoV, but I thought this accident was worth stopping a moment and considering on its own terms.Â  Also this has brought me some insight into another use of notation.Â  Our ears are very precise, but only in certain capacities.Â  While the same could be said for our eyes, these two modalities tend to appear complementary in many of their fortes and foibles.Â  Seeing something plotted out can not only help explain what a performer is to do, but it also facilitates certain kinds of analysis.Â  I had been using graphics previously to show my audience something about the music.Â  I do not think this is necessary for something like SoV, nor is it the only way to use graphic notation for systems music.Â  Nor are we stuck with max-patches.Â  This experience was an example of what happens when transcription is used for analytic purposes, as an aid for the composer.Â  I would say the same for my experiences with the much less visually pleasing display for TDAT.Â  TDAT's application of transcription was more symbolically oriented, however, which lends itself to still other types of analysis.