i've been working on an installation that consists of many simple sound sculptures --songbirds-- that react to one another and their environment. each sculpture is a simple robot, equipped with a mechanism for listening and a mechanism for making sound. 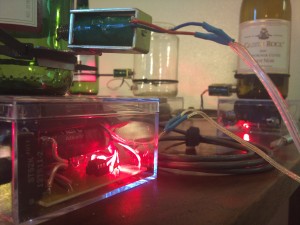 when a songbird's microphone picks up a sound louder than a certain threshold, the songbird waits for a brief period of time and then produces a sound in response. as a first run, i made ten of these. on their own, their behavior is quite simple and linear. as a group, some beautifully complex patterns emerge.

the sounding mechanism of a songbird is its solenoid, a small motor that knocks on a glass bottle. each songbird has a unique bottle as its sounding mechanism, and they span various different sizes. these bottles came from my own kitchen. i recognize the video is not high-action, but somehow just listening to the sounds of the sculptures without visual/spatial cues seemed to reduce the dimensions of the artifact too much. to give a sense of how they might actually be experienced in person, i've included some close-ups. 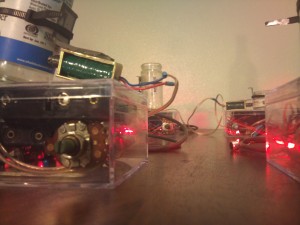 n. b. this type of creative work has a solidly defined place in my practice for reasons outside of the sheer sonic and visual enjoyment of the sculptures themselves. i view this type of project as a response to the work of one of my mentors, alvin lucier, whose work often explores emergent phenomena, with an emphasis on acoustics. similarly to much of his work, the process itself is all that is necessary and sufficient for a realization of the piece. this composition is not quite coupled to the sculptures that realize it in this case. in fact, i have seen several other realizations of this composition through to completion before, and it is something of an idee fixe of mine. i can state the concept as a question: what does a purportedly self-organizing network look like when it chokes?

but why this question? self-organizing networks are a popular topic in a variety of disciplines, ranging as far as economics to aesthetics, from philosophy of mind to ecology. my target for criticism has been the randian notion of stability in networks of agents acting in self-interest. while my earlier realizations attempted to take on the rhetoric of objectivism directly (viz. "sanction of the victim," 2009 and relevant writings on it.), i have decided in some later iterations to let the simplicity of the critique speak for itself. it's been a few years since i brought this conceptual connection up, but it's in there, so to speak, and reiterating it seems timely. for another, perhaps more valiant (or foolhardy) attempt at deconstructing the randian network, i highly recommend adam curtis' 2011 documentary "all watched over by machines of loving grace." 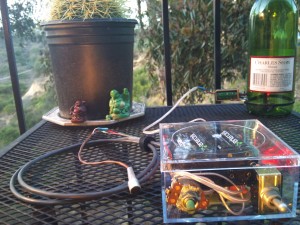 but let all of that slip out of your head for a moment. the real driving force behind this thing for me wasn't an attempt to take down rand, and when i'd drawn my first sketches of this, curtis' documentary hadn't even been released yet. the staunchly non-academic truth to my intentions is that i enjoy watching it. there is an almost fatherly pride i get when i watch automata that i've made behave in unanticipated ways. this feeling is especially present for physical realizations, as opposed to software. blame the hormones. i'm not going so far as to call these plastic, spastic robots my children, but it's definitely somewhere between looking at baby pictures and regarding a well-trained pet.

now that i've made my own flesh crawl, here are some pictures and notes from the making-of: 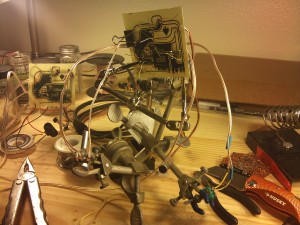 after designing and etching the pcbs, the next step was soldering the components. in my pcbs, i etched the values of the components with copper tracing.

next came drilling out the chassis. i used 4" x 4" clear plastic boxes from the container store, which turned out to be exceptionally fragile, despite how cool they look. 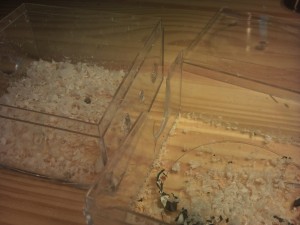 i naively treated the first few boxes as i would a metal chasis: drilling out the holes with my 1/2" bit. this turned out to be a great way to make tons of plastic confetti. eventually i adjusted my technique to start with a smaller bit, and used a grinding bit to ream out the holes until they fit. 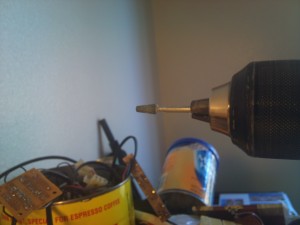 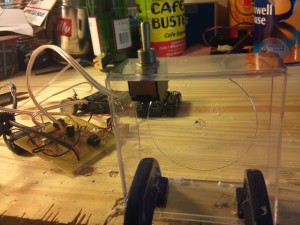 i ended up adding an indicator led to my boards, last minute. this turned out to be a good idea. 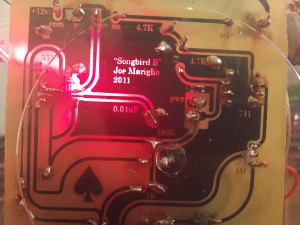 one thing i neglected to mention earlier in this post is that i'd been invited to newcastle, australia to participate in the electrofringe 2011 festival. among other things, a major component of my activities down under involved these songbirds. the sculptures would be installed in a park, and i would bring supplies to teach other participants how to build them. more on the specifics of the festival will come in a later post. right now, i'd like to show you how i made the updated pcbs: 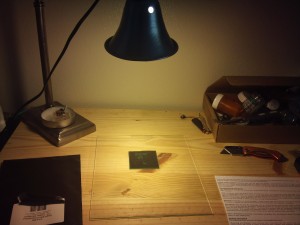 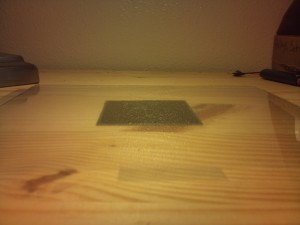 i exposed the photosensitized boards with one of those curly "eco-friendly" lights. incidentally, no one tells you that these contain high amounts of mercury and are therefore in fact, eco-unfriendly. i exposed for a period of 5 minutes at a distance of 1 foot. 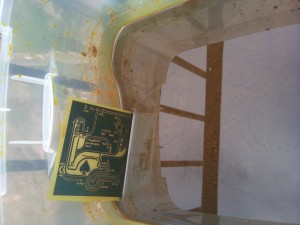 i etched a few of these boards in ferric chloride, which is what i'd used for the last batch. this process became not only time-consuming and inaccurate, but also expensive and generally unpleasant. 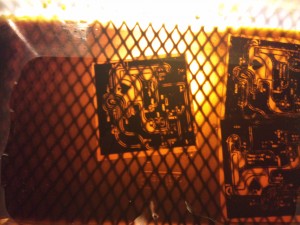 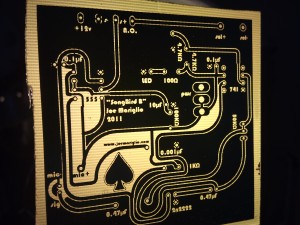 to check on their progress, i would shine a light through the bottom of the clear plastic tank. eventually the boards' details came into view. after some time, however, so much copper was suspended in the solution that it became opaque, making this impossible. also, the etching process slowed to a crawl. 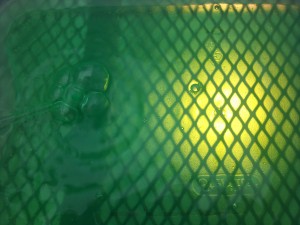 i took a hint from this article and made a new etching solution of muriatic acid and hydrogen peroxide. i also bought a cheap air-pump for a fish tank. this sped up the process considerably. i've stuck with this re-useable (!!) etchant for all future projects, and i swear by it. 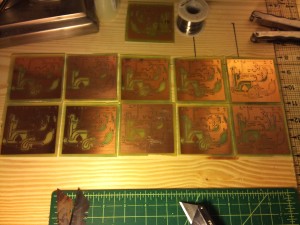 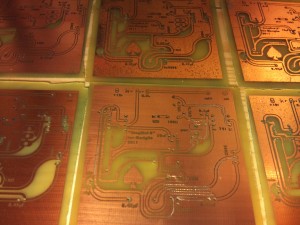 One thought on “Song Swarm”