I recently had the privilege and good fortune to travel to Australia again! This time, I got to play some music and even do some teaching, thanks to Estee and the other kind folks at Electrofringe and UNSW. In the process, I really enjoyed making field recordings of trains & birds (thanks, Sam!), taking pictures of some beautiful street art, and hanging out with friends both old and new. I was again reminded of how incredible the coffee is down there. That alone would be reason to go back! I also got to visit Melbourne this time, which is a truly lovely city, with some lovely people in it.

Sadly, I was unable to record any of the sets I performed, due to technical problems that were ultimately the result of my own stupidity and jetlag. However, I'll try to reconstruct the set lists from memory, and since most of my music is available for free on this site, you could piece the sets together in your mind if you were so inclined. One caveat is that I've started incorporating a lot of improvisation into my sets again, remixing on-the-fly, sprinkling granulated field recordings, and playing with homemade electro-acoustic instruments. So repeat performances are still pretty rare, despite the fact that I reuse material. Of course, you should just come to one of my shows to see what I'm talking about.

At UNSW, I led a 5 hour workshop which introduced creative types to the joys of CMOS logic gates. We built a NAND gate oscillator bank, which could have up to four operators per chip, and a simplified version of the venerable Craig Anderton tube screamer. I also briefly introduced the binary counter as a way to produce subharmonics. This turned out to be productive even for those who had never seen a capacitor before.

I then gave an artist talk regarding my creative practice, and broke down my current research interests at UCSD. The most exciting part of this talk for me was the Q & A, where essentially we all just chatted about what we were into. It was really inspiring.

In the evening, after a weird 2 minute rainstorm and bright orange sunset, I played about 50 minutes of amplified sounds in a darkened room. The crowd was small but people seemed very interested. Hanging out with the attendees before and after the set made for a very intimate performance. Of course, there were silly technical problems which marred the first 10 minutes or so, but I was happy about where the sound ended up. I got to test out some new granular instruments that use a game controller as an interface, now an essential component of my live act. The set list was as follows:

untitled a (a field recording of coyotes howling and cackling in the canyon behind my apartment.)
untitled b (a few minutes of free improvisation with granulated piezo recordings of a teapot.)
sweet acceleration.
give me everything.
refuge.
set them free.
dayglo.
trasher (encore).

Having slept only an hour and a half prior to the full day of events, I'm shocked everything went as well as it did. My primary source of stokedness was having met such amazing folks, and indeed surviving the onslaught.

When I came to Melbourne, I played Sean Baxter's Make It Up Club. I played the following:

untitled b (a few minutes of free improvisation with granulated piezo recordings of a teapot.)
untitled a (a field recording of coyotes howling and cackling in the canyon behind my apartment.)
give me everything
refuge

Although this set re-used material from previous work, I doubt it would have been recognizable to many. Refuge, for example, was completely diced up. For this performance, I focused on building unrelenting walls of noise, making thorough use of the subwoofer and somewhat oddly arranged sound system. I put special emphasis on gestures that demonstrated immediacy and responsiveness to the moment. ("Making it up," as it were... 😛 ) I had the privilege of meeting and playing alongside several excellent improvisers. Also, Sean Baxter was positively charming.

Actually, I must say that everyone in Melbourne seemed positively charming. I could see myself living there...

For the rest of my short stay in Melbourne, I wandered around making field recordings on Sam's gear. Those will be uploaded soon. For now, I hope you enjoy a few of the pictures of street art I took around Sydney: 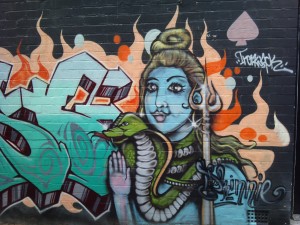 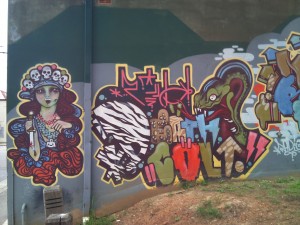 One thought on “OZ”