i have been working on a new instrument design, conceived of during a few conversations with berglind tomasdottir. it's called a "hrokkur," which is a play on words in icelandic, a blend between the words "rokkur," meaning spinning-wheel, and "hrokk," meaning rock ('n roll). the instrument is very similar to a hurdy-gurdy, which is a medieval stringed instrument that makes sound with a circular bow. i designed the instrument using readily-available, frequently recycled materials-- mainly a guitar and a bike. 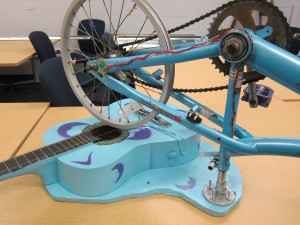 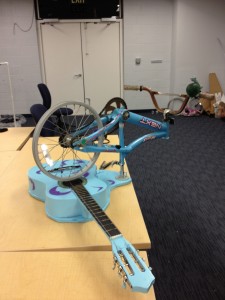 as you can see, the hrokkur hides very little about its construction. it even comes apart, to make touring easier! unlike the hurdy-gurdy, the hrokkur invites the performer to tinker with the sounds of the instrument, by making all of its mechanisms accessible. furthermore, the hrokkur can play continuous glissandi, which affords the instrument even more flexibility, in the context of microtonal musics. the traditional way of playing hrokkur is to pull one of the strings up to the wheel with your fingers, allowing a great degree of freedom in tuning. certain techniques, such as using a bit of fingernail on the string, allow the hrokkur player to emphasize different harmonics. although the hrokkur may be heard acoustically, i outfitted the prototype with piezoelectric pickups, both under the strings and on the crankshaft. having two separate pickups allowed berglind to select between the continuous drone of the strings and metallic rhythms of the bike spokes. 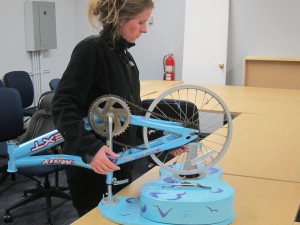 you can build your own hrokkur with only a bike, a guitar, and a few extra nuts and bolts!

first, remove the handlebars and fork from the frame of the bike.

next, remove the seat. the saddle itself may be discarded, but the saddle post (the pole the saddle is bolted to) should be kept. 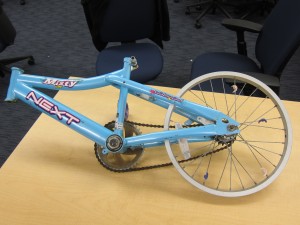 all the bikes i've taken apart have the same sized saddle post: somewhere between 3/4" and 1/2" in diameter. i used a 3/4" set screw connector (electrical hardware) to connect the saddle post to a 3/4" floor flange (plumbing hardware). then, i bolted the flange onto a wooden base.

the back wheel acts as the bow to the strings, and you should remove the tire completely. coat the wheel with a generous layer of rosin to improve the tone. the bike will sit upside-down on the saddle post.

take out the middle three strings on the guitar, and replace the high e with the a string. in my experience, the wheel can only make optimal contact with two strings at once. anything else gets in the way. 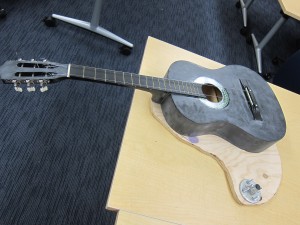 bolt the guitar to the wooden base. the guitar should be perpendicular to the bike wheel, and the wheel should sit somewhere in the picking area of the strings, with just the right amount of pressure. you will need to calibrate all of the distances and angles for your particular bike and guitar to work together. to my knowledge there is no general way to do this, you just have to go by feel. 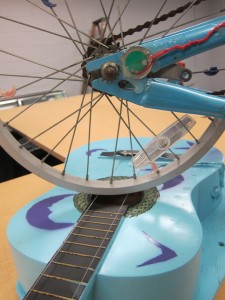 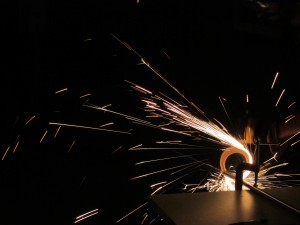 for my design, i also implemented two tweaks that required the use of a metal grinder. while this was fun (and sparkly), it isn't totally necessary, and i wouldn't recommend it if you've never used one before. that being said, these changes are:

cut off the pedal that sits on the inside of the angle with the guitar. for a right handed guitar, this is the left pedal. see the pictures if this is confusing.

cut off the front of the bike altogether, by severing the top and down tubes near the seat tube. while this seems a little extreme, and i didn't end up doing it for the prototype, it makes the instrument a lot smaller. i've been doing this tweak on all my later hrokkurs.

here's a short video of me playing the prototype without amplification:

berglind's debut performance of the hrokkur was totally magical and not to be missed. she is awesome. see 5:34 for some hrokkur fabulousness:

i have been building more hrokkurs for this kid's ensemble i'm currently in charge of. hrokkurs are perfect for kids, because they provide an easier solution to sound production (versus bowing), while still allowing for tons of variation in technique. more on this later...

One thought on “Hrokk On”