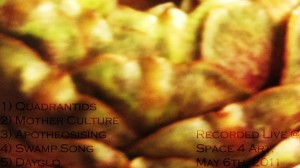 "Quadrantids" was constructed from short bits of "Sed, at the Abysmal Pyramids," which I first recorded a very long time ago, but started dropping into my live sets this winter. The overall granular density moves in an imperfect bell curve, starting and ending very low and becoming quite high in the middle. Individual grains are filtered, gated, and further processed using long convolutions, wavelet filtering, and spectral granulation. Many dynamics curves were drawn by hand but informed by spectral compression and filterbank enveloping. The scale for this piece is : [ 1, 1.067, 1.2, 1.5, 1.6 ] . This scale also informs rhythmic relationships. Phrase-length features are derived with stochastic methods. I used both pulse and stochastic masking of events to subdivide by various rhythms / pitches. Of course this isn't everything that was happening, but you get the idea.

"Mother Culture" was constructed from short bits of "Quadrantids." Multiresolution heterodyning filterbank analysis drives asynchronous layers of frequency modulated grains. This process happens selectively to different grains. Various long convolution kernels are also applied. A kind of granular reverb was applied which repeats and detunes individual wavesets (every three zero crossings), building up overlapping trains as the sound progresses in time. Wavelet filtering was also applied here. The train sounds came from field recordings I made when I visited Melbourne. There was a wonderful moment when I played this part: a brake sound from the street mingled beautifully with the brake sounds I was producing on stage. I wish I had a mic feed.

"Apotheosising" was constructed from short bits of "Mother Culture." No, all this resampling did not happen live (although some of it did), I cherry-picked the bits I wanted to build each successive piece out of. The bass sounds are the result of nearly synchronous granulation of the kick, waveshaped with a lovely transfer function that contains a sinusoid chirp and some Chebyshev polynomials. Many of the above techniques were also used, long convolutions, wavelet filtering, etc... The multiresolution filterbank drives the phase and amplitude of sinusoid grains with hanning windows. Since the transform is nearly linear in phase, I was able to subtract the grains from the original signal to pop holes in the time-frequency lattice. The scale for this piece is : [ 1.0, 1.030303, 1.0645162, 1.15, 1.5 ,1.5555556 ] .

"Swamp Song" was not constructed from short bits of "Mother Culture." Instead, it was constructed from a scene from the Neverending Story, wherein Atreu and his horse Artax are trekking across the Swamp of Sadness. The horse eventually gives up and the swamp consumes him. As a child, this scene was among my first vivid encounters with death. The scene is still difficult for me to watch, even as an adult.

"Dayglo" is one of my favorite songs. It took me years to perfect. The form traces out a stochastic variant on the "algae" L-system. The melody is in a just lydian scale, and much of the timbres are comprised from sinusoid grains with hanning envelopes. Generally speaking these grains are extremely short, and appear in pulse trains. Using convolutions and stochastic masking, I smudge out the melody into chords. The transient part on that lovely snare drum uses a contact mic recording of a single drip of a coffee machine. As with all the pieces on this program, I perform live granulation and effects processing to remix the piece live and blend it with the tone of the set.

Thank you to Chris Warren for inviting me to play on that sick stage.
Thank you to Adam Tinkle for sharing the stage with me later that night as Creosota.
Thank you to everyone who came out to have their heads pummeled. I sincerely hope to do it again soon.

One thought on “High Sotiety”