i have been working on this fuzz / tremolo circuit on and off for a few weeks. i am very excited to put it all together, although at the time of the recordings below, it was not housed. i ran into some logistical problems with putting the circuit into the chassis of an old countryman di box, but i think i've figured it out at this point. its unhoused state was messy but totally functional: 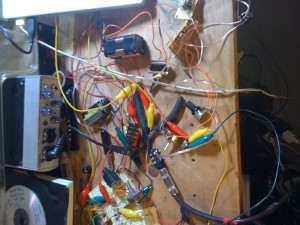 the fuzz comes from a variation on craig anderton's circuit with two gainstages. the difference between mine and anderton's is that i used a 2n3904 npn transistor in the feedback path of the first gainstage, in parallel with a silicon diode. the result is a smooth, creamy fuzz with tons of overtones and plenty of sustain. it's nearly identical to the fuzz used in this previous post. the difference is that now the tremolo is optical, resulting from a blinking led and photocell pair. the trem has a variable speed and can also be completely bypassed. since i can't play the guitar to save my life, i invited my friend kunal prakash over to try it out.

here's an audio sample of a fast trem setting.

here's an example of a slower trem setting.

here's an example with less fuzz.

i was very pleased with this pedal's sound on a guitar. also kunal can really shred. we played for a few hours after these samples were made, using my ring mod to create a hybrid texture between his guitar and my laptop. i was livecoding on my eeepc in supercollider, starting with a simple sine tone to test the effect, and eventually experimenting with lowpassed sawtooth tones. sadly, i had stopped recording at this point so description is the only documentation i can provide. suffice it to say, it was lots of fun.

this morning, after naming the pedal the "jack chop fuzz," i tried to fit the circuit into the di chassis. in order to fit everything in, i ended up taking a hacksaw to it. thus, i arrived at the perfect name for this pedal: the hacksaw. unfortunately, the archive pages still say "jack chop," so i will accept either name, although "hacksaw" is more appropriate, in my opinion. housed, it looks like this:

i've already got one taker. who else wants one? ^_^