a recording of a short set i performed at the che in san diego, on saturday, september 25th. my primary tools were supercollider, matlab, and logic. i also used soundhack and audacity. all original unreleased material, slated for free digital release with abattoir records in new york sometime this year. 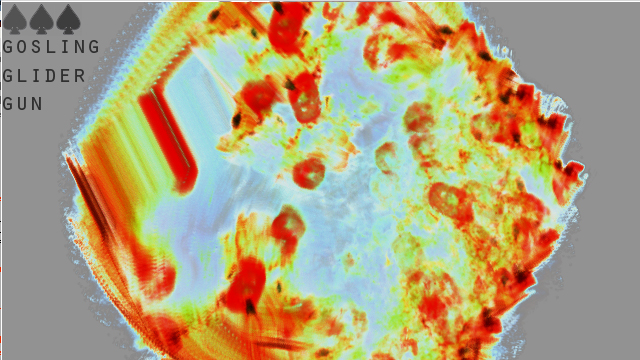 * * *
What follows is a brief description of each piece, mostly from the poietic (maker's) perspective. If you'd like a better esthesic (listener's) description, write a review! I will try to expand on the more significant ideas in later posts.

Refuge is a 1 dimensional cellular automaton, following rule 150, which generates oscillating Serpinski Triangles. Starting with a simple phrase, the rhythmic patterns expand and contract according to the states of the cells in each row. The scale is derived from a just approximation of 5tet overlaid with a just approximation of 7tet. The vocals are mine- I'm saying a Tibetan Buddhist prayer for taking refuge. I'm using wavesets to alter the "gender" of my voice independently of the fundamental pitch. The metallic percussion that comes in midway through the piece came from contact mic'ed springs and other metal objects, and follows a more complex variation on the pattern provided by the cells.

Antonym is a remix of a track from my previous LP Codecs, 2007-2008. Much of the sound comes from spectral grains, the result of a time-domain constant-q transform. The remix uses a liberal amount of spectral dynamics processing to add some depth, and sidechained non-windowing convolution for negative space. The end of the piece melts into a sound I recorded in the canyon behind my house in California, which I believe is a car transmission.

Dayglo is a sonification of the first l-system Lindenmayer discovered, which describes the growth patterns in algae. The sounds used are a combination of contact mic'ed objects (such as a coffee pot), and single-cycle gabor wavelets. Through non-windowing convolution, I smear the melody into intervals and then into chords.