i've been working on a networked sound installation inhabited by simple automatons called "songbirds." i have previously done another incarnation of this idea, so i'm working on version "b" now. the idea for this particular version actually came from cicaidas, not birds, but the name has stuck for better or worse. maybe the "b" stands for "bug?"

songbird b's are simple electromechanical devices that are capable of both listening to sounds and making them. to listen to sounds, they use an electret microphone element, and a basic op-amp circuit that measures approximate sound pressure level (SPL). when the measured SPL reaches a certain threshold, the songbird triggers a logic based one-shot that lasts for a few seconds.
here's a riveting video of me testing this logic circuit:

this logic pulse causes a solenoid motor -- the kind of motor doorbells use -- to hit a resonant object after a short delay. a single instance of these responsive agents could be a bit dull, but my hunch is that in large groups they exhibit interesting behaviors. in fact, i'm pretty sure of it! a very long time ago, i did this with computers on a local area network (LAN) and it was awesome.

to test if the prototype would be capable of responding to others of its kind, i attempted to induce feedback with a single unit, pointing its mic at the surface it would strike. this resulted in a near-regular, metronomic activation.

once i figured out my circuit, i had to work out how the songbirds would sing. this took a lot of thinking, and i went through numerous designs before settling on my solenoid idea. i'm quite enamored of the non-electronic sounds this makes, although demos that use the same 'brain' to control a vco / vcf section were rather promising too. 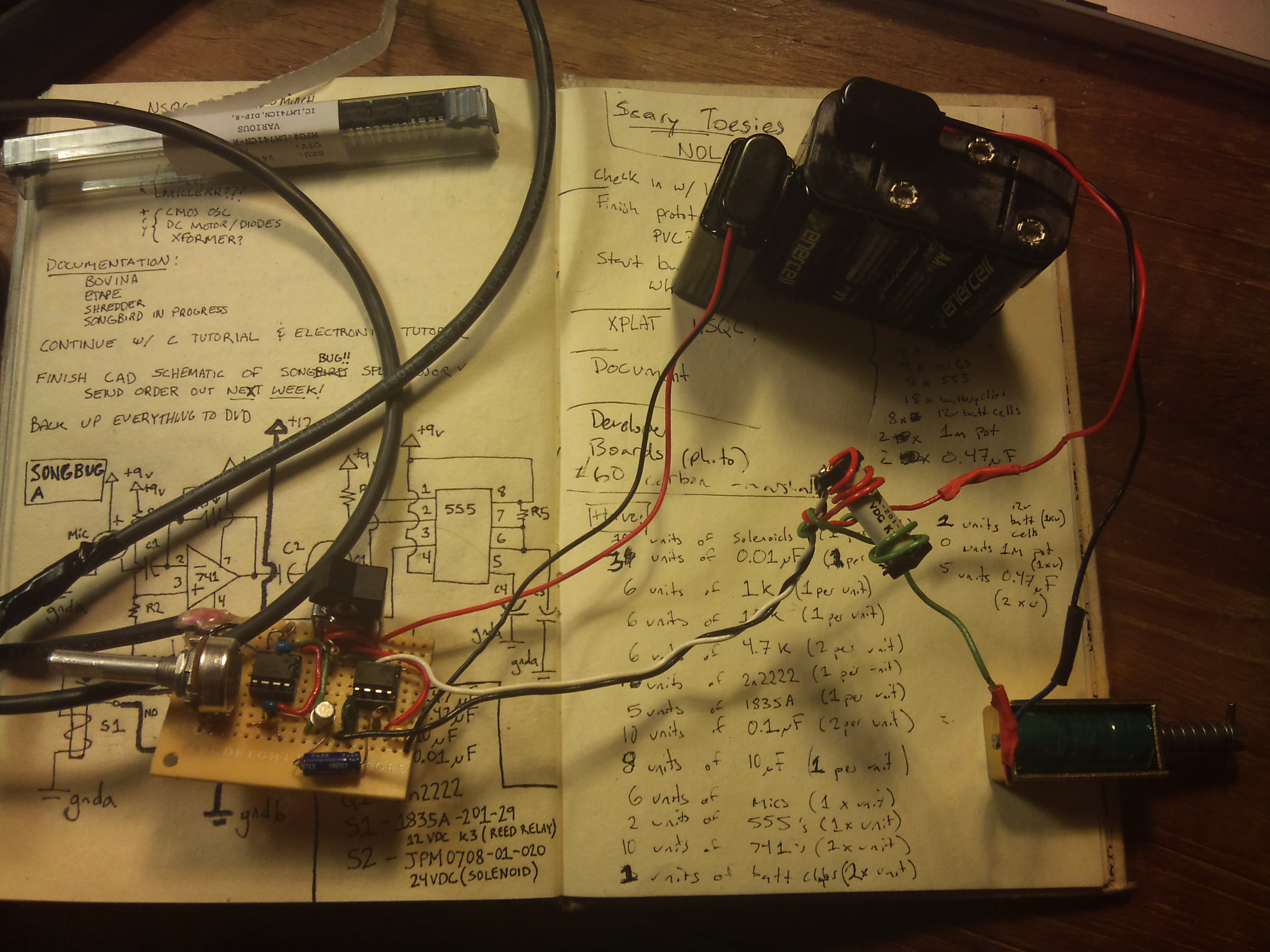 an interesting problem i encountered was that while metal objects sound amazing, the solenoid failed to recoil reliably after striking them because the knocker becomes magnetized. if it was totally essential, i could have used non-magnetic metal, or come up with an array of solutions involving other mechanisms, but instead i just worked around it and tried other materials. i settled on glass jars. they sound and look great! actually, with these solenoids, i found i had to keep the striking surface just far enough away so the knocker could knock it well, but not so far that it couldn't recoil again. finding this sweet spot involved a lot of testing and nudging while the epoxy set. 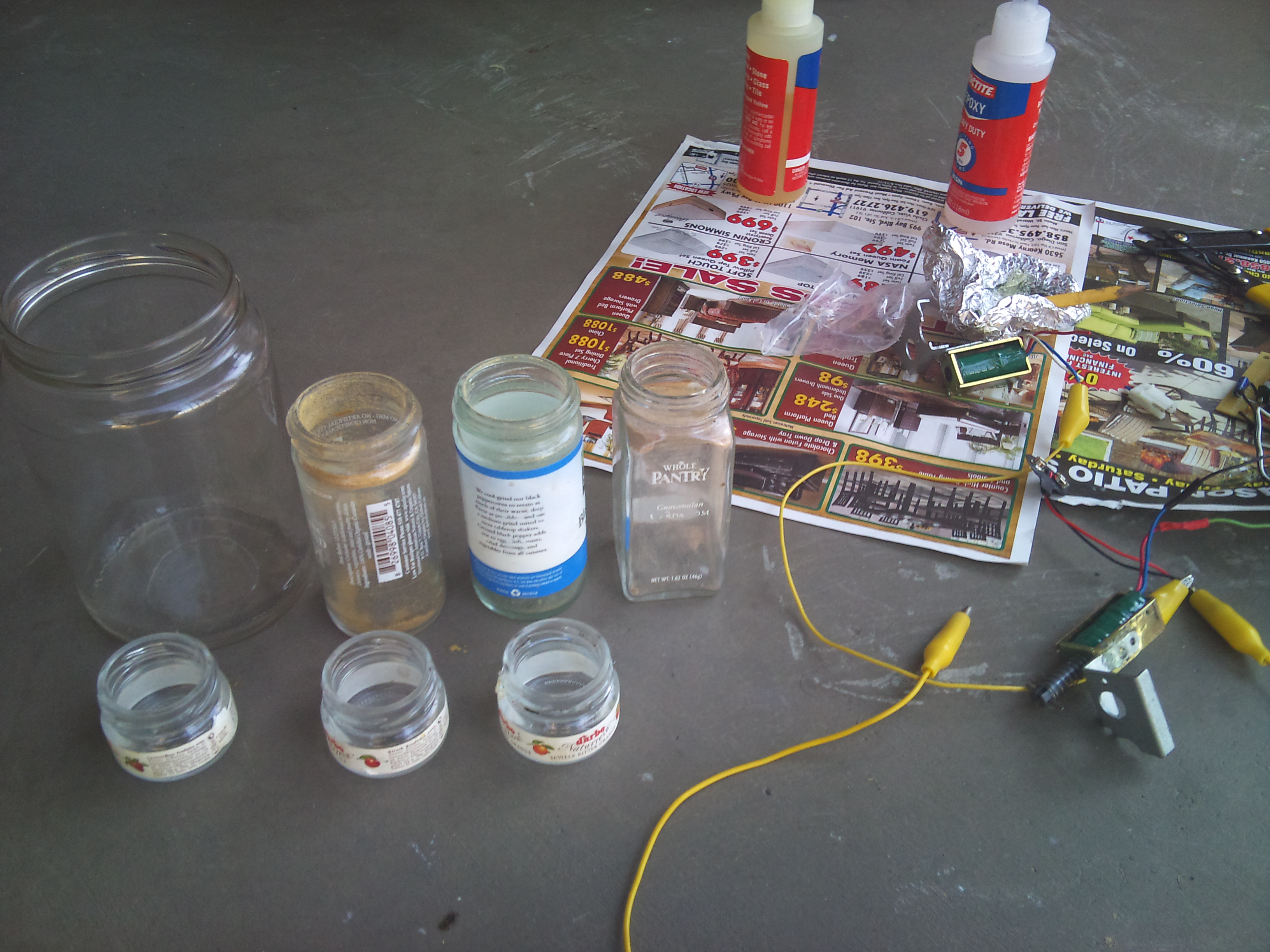 i cut the flanges off a metal chunk which i think came out of a synth i dumpstered and disemboweled ages ago. 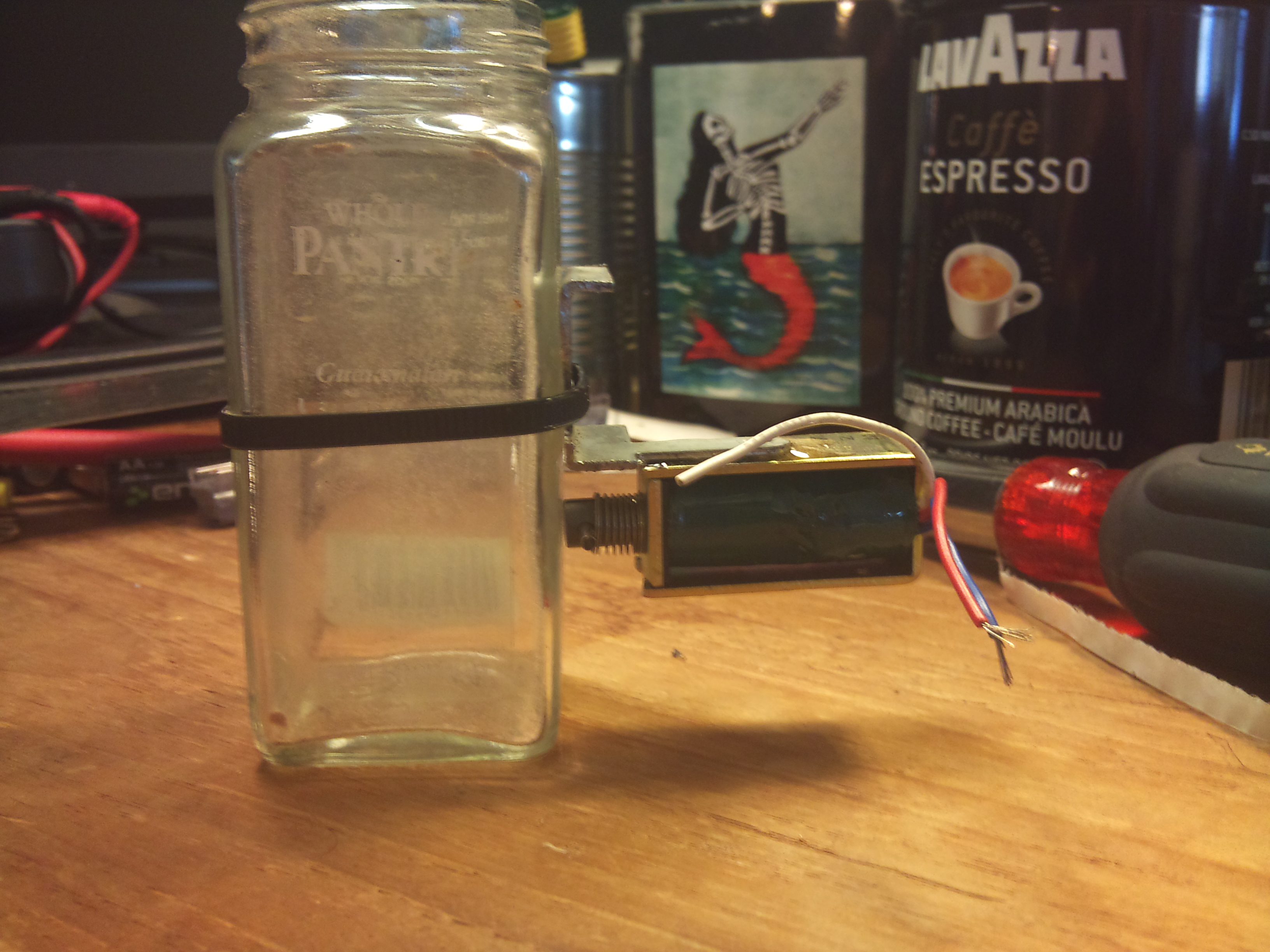 DIY ETCHING
somewhere around this point i started looking into pcb fabrication techniques. perfboard has served me well for my brief and humble electronics career, but the prospect of making, say, a dozen of these in the same manner as the prototype made my head spin. i looked at a few board houses, and made a few cad layouts, and eventually decided that for my time and money (& aren't they the same thing anyway? thanks, capitalism!), it made more sense to etch my own pcbs. i did some research (and asking) and ultimately went with the positive phototransfer method.

now, this particular blog entry is not the place for a complete tutorial on fabricating pcbs at home. there will very likely be a future post (hopefully in video form) that will outline my preferred method in much more detail, once i have a little more experience. but, i'll go through the basics of the fabrication method i used, complete with some photos i took along the way. it was really fun, and not too difficult! i only got very superficial chemical burns on one fingertip. i owe an enormous debt of gratitude to cooper baker for the sage wisdom and moral support when things went awry.

i started by making my 2-layer board layout into a 1-layer board layout. i know it's possible to do multilayer boards at home (why wouldn't it be?) but for my maiden voyage i decided to go with something slightly less intimidating. i went through several iterations of 1-layer board layout, too, messing with trace thicknesses, tolerances, and resolutions. this was my first one: there are a few things wrong here i'd like to point out. first, the text is going to turn out backwards, since we're printing on the bottom of the circuit board, not the top. think of it as an x-ray view of your circuit. second, the tracings are way too skinny. you should try to make them as fat as possible, and use a ground-plane. this will help you save on etchant, and will be more forgiving of errors. these days, if you look at a modern pcb, all the tracings are super tiny. this may seem like it uses less copper, but really all that excess copper ends up in the etchant, and while the etchant's pH can be neutralized, it's the dissolved copper that causes all the negative environmental effects. so use a ground plane! third, the image itself is only 150 dpi. to get a decent transfer, you should go no lower resolution than 600 dpi.

now that's a little better! i also made my typeface a little more civilized. the text is backwards, but the components are forwards. think about it for a second and this will make sense. we'll be making transparencies with these, and we'll want the surface you printed on to directly touch the board.

since i don't have a printer, i went to kinkos, chatted up a particularly sympathetic employee (turns out she'd done some aquatint etching in the past) and got some free transparency paper. i printed the layout, careful to make sure it stayed the same size, with one of those giant lazerjet copiers, with the darkness turned all the way up.

to hold the transparency to the pre-sensitized photofabrication boards, i used a pane of glass. the first two exposures i tried failed miserably. i used sunlight, and exposed them for about 10 minutes. this was overkill by a long shot, and overexposed my boards into oblivion. i've since made them into artwork. 🙂

instead of sunlight, i had the best luck with one of those 13W curly eco-friendly fluorescent bulbs, placed about 1 foot above the transparency, exposing for 5 minutes. by the end of my fabrication run, i was erring on the side of 4.5 minutes. i prepared a 5 / 1 solution of water to developer, and made a bath. some people reccomend lightly brushing the boards as they develop. i do not. all i did was wiggle them a little (with gloves on, of course!) under the solution, and in about 20 seconds my artwork appeared. immediately after all the blank spots were washed away, i dipped the boards in cold water. i tried rinsing the first couple with water from the tap, but this turned out to be a bad idea as it was too forceful. 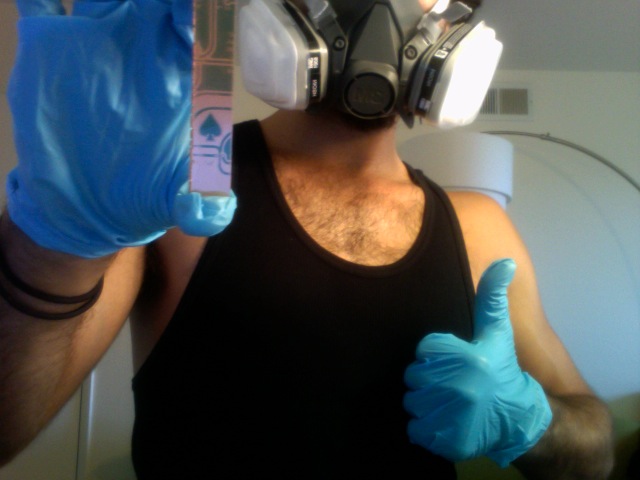 test patch success! i was so stoked beneath my possibly overkill respirator. 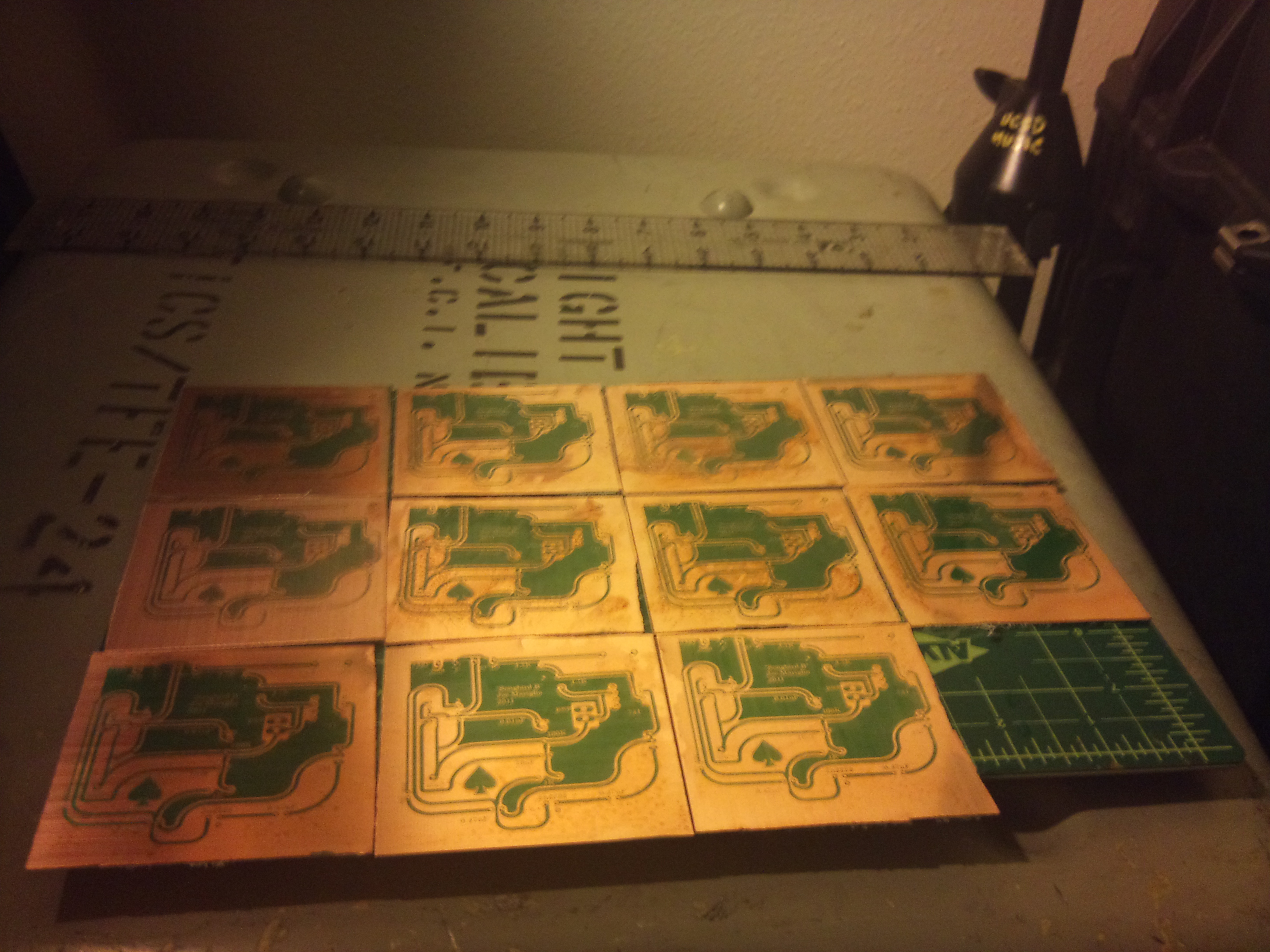 i ended up making 11 boards. with my two perfboard prototypes, that makes a baker's dozen. i may try to make more for the installation, time permitting.

next, i prepared my etching tank. i actually used the same plastic tank as i did for the developer. it's nothing fancy- no bubbles, no heater, no sparging unit. just a transparent plastic tank. DON'T USE ANYTHING METAL AT THIS PART OF THE PROCESS! i used ferric chloride for my etchant, which is some nasty stuff. i did my etching outside, on my porch, and used gloves, a respirator, and plastic tongs. i should have had goggles on but i couldn't find them. shame on me! use goggles!

...ok enough moral panic for the moment. i warmed the etchant up in a bath of hot water for a few minutes. apparently this reduces etching time, making your edges come out sharper. etching took about 45 minutes, give or take ten. i just kept shining a light through the bottom of the tank to see where the copper had been eaten away. try stirring the ferric chloride lightly, to move around the 'hot spots' so you get a more evenly distributed reaction.

if you do a batch like i did, not all the boards will be finished at the same time. carefully taking the boards out as they finish, dip them in a bath of fresh water. this will neutralize the acid and they should be safe to touch once you rinse the water off. i was super-cautious and rinsed them a few times. remember to wash your hands. here's what they looked like when i took them out: 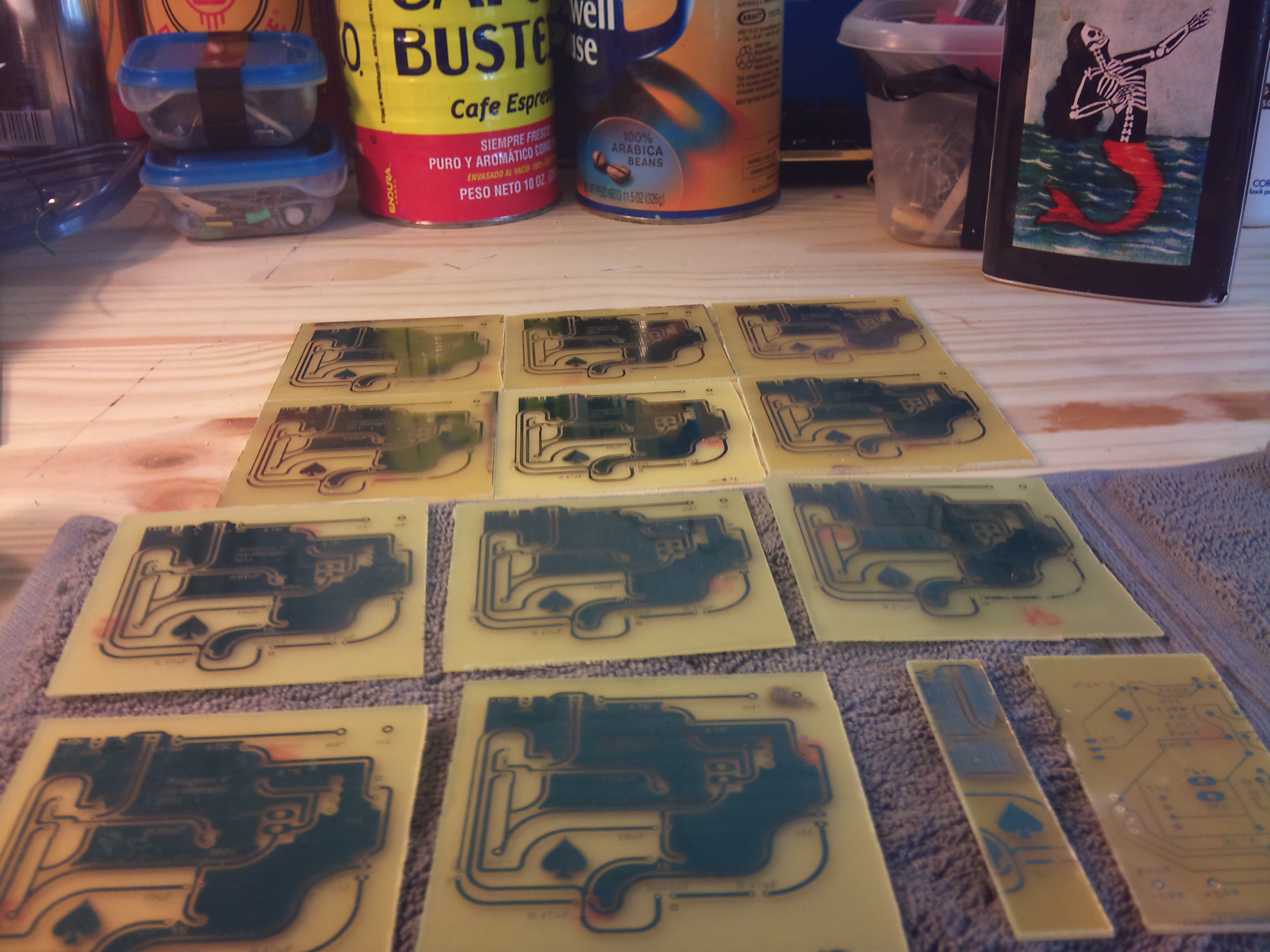 next step, drill 9,000 holes! thanks, cooper, for letting me borrow your drill press. i used #60 carbide drill tips.

3 thoughts on “DIY Etching: Songbird b”