Shortly after their tour, the EYEBALL FRIENDS became infected with a strange and seductive sickness. They labored day and night, sleeping next to their tools, only to wake up in the same cold sweat, and with the same inexplicable drive to press onward. All told, the episode lasted a little under two weeks, but by the time it had run its course, a terrible and gorgeous new member of their band was born. 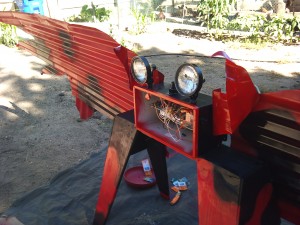 Bovina Clovis is a siren of the south. She possesses the most intoxicatingly beautiful voice in the world. Her udder-tentacles lure her prey into a trusting stupor, as she digests them alive. Her massive wingspan does not provide her with flight, rather, they allow her to vibrate the earth, giving her dual powers of creation and destruction. To keep from destroying all of southern California, she must feed... 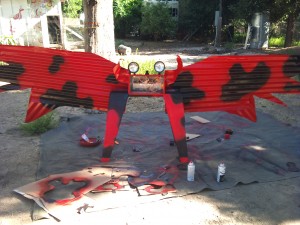 As she is still incomplete, she currently consists of a fearsome body, the first of many heads, and a 12' wingspan. Her wings are made from aluminum siding, and the edges have been ground down to permit bowing. Each wing has a piezoelectric pickup, and one wing has an extra piezoelectric element for use as a speaker. Many times she sings all by herself, through buzzing, gut shaking feedback. The EYEBALL FRIENDS will never sound the same again. 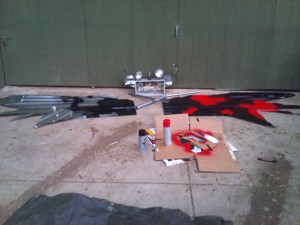 The FIENDS have yet to debut this beauty, but their first show with her is scheduled as part of BRAIN BOMB 2011- at TIL2 on October 14th. The FIENDS have already recorded two live studio albums with her.

The first of these - ARE YOU RENTING?? - is a celebration of sex and death cut from a larger, 3 hour session recorded at Anthony Davis' suburban homestead. 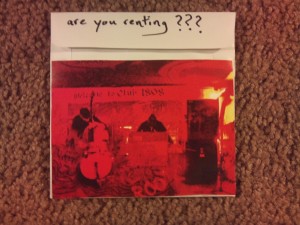 Massive amounts of other material exists in addition to this. While none of these studio recordings are overdubbed or edited in any way, they are culled from literally days of material. These recordings --and a few other rarities-- have been released in physical form in a limited edition run of 55 CDRs, which have been distributed for free throughout Berlin, Amsterdam, Lucerne, and Paris. The FIENDS toiled long and hard over these artifacts. Each one features unique, hand-made cover art. 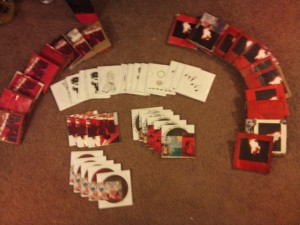 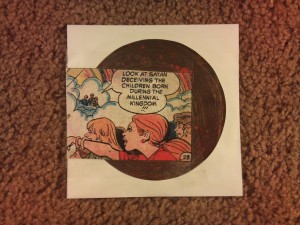 Miss Clovis will eventually sport a rack of amplified udder-tentacles, made from heater coils, with tubes which dispense strawberry milk.