today i made a battery-powered amplifier out of an LM386 chip and some other, mostly recycled components.Â  the schematic i used can be found in the datasheet (it's a pdf).Â  i went for the 200x gain circuit.Â  it's housed in what appears to be a jewelery box, but really it was a container for one of those space pens.Â  funny how during the space race the americans thought space pens were such an important design problem, while the soviets used pencil.Â  maybe that's just an urban legend.Â  i don't know. 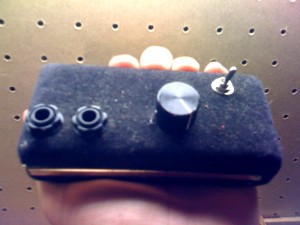 the easy access this case provides is certainly a bonus.Â  i will definitely be improving on the circuit as time progresses.Â  i decided to house the amp so neatly because it's something that comes in handy often.

after i had some wine, i got into playing with amplified slinkies and the filter / distortion effect circuit from a few nights ago.Â  the whole setup looked like this:

i'm calling the track that resulted from improvising with all this "a slow, hopeless fire."Â  it's a bit aggressive.Â  i'm still pretty angry about the most recent hand i've been dealt.Â  this is the most constructive thing i can think to do about it.Â  enough said.

aside from a little dynamics processing, everything was improvised and totally analogue.Â  the sound comes from feedback from the little speaker -driven by the new amp- through the spring, and that crazy filter.Â  i think i'll house that thing the next night i spend here in my studio, which unfortunately won't be for a few days.Â  it's just as well; there's plenty of computer music to make, too!

One thought on “a slow, hopeless fire”